The Ballad of Songbirds and Snakes Review and Analysis 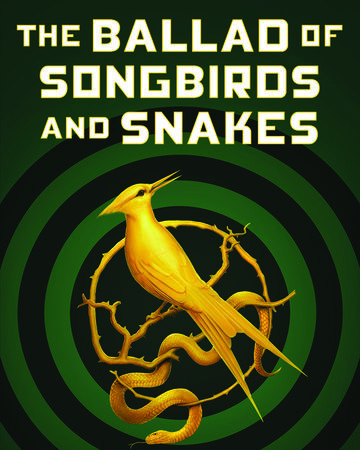 The Ballad of Songbirds and Snakes Review and Analysis

Suzanne Collins has given the world a new edition to the Hunger Games series: The Ballad of Songbirds and Snakes. This prequel to the original trilogy was published May 19, 2020 and follows the youth of Coriolanus Snow, otherwise known as the infamous and sinister President Snow. Not only is the concentrated fandom excited about this new novel, but it seems the general public is also enthused. The books are once again catching fire (pun intended) as many are re-reading the original series before indulging in the new prequel. Having fully read and researched aspects of the novel, I can confidently express my honest review and analysis of The Ballad of Songbirds and Snakes. The review will be spoiler-free, however the analysis will contain spoilers. I advise not reading my analysis unless you have fully completed the book.

Review: The Ballad of Songbirds and Snakes offers a different perspective on the country of Panem. This novel takes place sixty-four years before the beloved original, The Hunger Games. Interestingly enough, we are introduced to new and surprising information about the Capitol in particular. It becomes easier to understand how and why Coriolanus Snow became the calculative, yet ruthless President he was in the original series. The book offers a variety of new, likable characters who are critically substantial to the plot. Moreover, Ballad contains numerous twists and turns that made my jaw drop to the floor. There are surprises in store. Do keep in mind that this book is thicker than any of the other Hunger Games novels. The original trilogy books all cap around 390 pages or so. Ballad is 517 pages. Interestingly, this novel seems to have a higher standard of vocabulary and sophistication, more than likely because Collins is continuing to pander to the readers who grew up with and adored the original series. Ultimately, the fans are older now and can handle more substantial content. General reviews for this book are scattered. Some claim that the novel is very well-paced and enjoyable. Others suggest that it is somewhat of a lackluster. Personally, I was surprised by how quickly I was swept into finishing this novel. Yes, there were some slow moments, but reading to the end was greatly rewarding. Overall, I would give the novel an 8.5/10. This book not only suits the wants of fans; casual readers of the original series may very well end up enjoying Ballad as well.

Analysis: Once again . . . spoiler warning! There are numerous topics to discuss regarding the entirety of the novel. First and foremost, I want to discuss Coriolanus Snow. Given he is the main character of the novel, we can fully grasp his interesting mindset. Coryo certainly thinks in a narcissistic manner; he is constantly pondering what will benefit him the most. He often belittles his friend Sejanus (who continuously acts on moral grounds) because Sejanus does not consider the consequences of his actions. Snow always accounts for the repercussions that might follow his own stray from the Capitol’s expectations, whereas Sejanus is either incapable or uninterested in doing so. Snow’s bond with Sejanus is arguably a mix of lust and friendship. Sejanus’ family provides assets that Snow and his family do not have. However, I’m not convinced that the bond between Snow and Sejanus was entirely false. When Sejanus was hung, Snow was struck with a surge of depression. Thus, their bond was almost sincere, with Sejanus fully embracing Snow as his companion and Snow partially valuing his colleague, yet fully acknowledging his “treasonous” actions against the Capitol.

Speaking of bonds, now comes the question: did Snow ever love Lucy Gray? I believe Snow was in love with the idea of Lucy Gray, not Lucy Gray herself. This is evident because Snow’s potential future with Lucy Gray (in his mind) was unconditional. They would live together in the Capitol and she would “belong” to him. When they forged the plan to live in the woods, Snow slowly started to lose himself. A life in the wilderness was not what he anticipated nor wanted. He quickly regretted their plan and things began to fall apart. Yes, he did find Lucy Gray attractive, but desire based solely on appearance is vain. There was a connection between Snow and Lucy Gray, yet it was more of a fabrication in Snow’s mind rather than a reality.

The popular opinion on Snow in this novel is that he was a narcissistic person from the getgo only looking to benefit himself without considering the principles of morality. I think this is half true. Snow understood morals, but he needed a nudge to cease caring about them. That nudge was Dr. Gaul, arguably more sinister and vile than Snow’s future self. Do I have empathy for Snow? Yes . . . but to a limited degree. Despite his unfortunate circumstances, he could’ve followed his moral compass and either decided to flee with Lucy or challenge the capitol. Ultimately, he did neither.

On the basis of substance, this novel adds surprising layers to the original series. Ballad invents new meanings behind mockingjays and “The Hanging Tree” song that only further the narrative years later with Katniss. However, I felt some of these references to the original books were forced. The allusion to katniss (the plant) was a bit of a stretch in my mind. Its result was not of major significance, so it seemed a tad futile. Additionally, I thought Snow should have only started disliking the mockingjays after they repeated Sejanus’ last words at the hanging. His immediate distaste for the mockingjays seemed a bit odd and out of the blue. However, Lucy Gray writing and singing “The Hanging Tree” made perfect sense. I loved the amount of depth the song has considering Lucy Gray’s own experiences. Once again, it adds to the original series in a special way.

One character that was unexpectedly vital to understanding Snow and his family history was Dean Highbottom. Snow’s decision to poison Dean Highbottom after unearthing his past exemplifies his fall from grace and his decision to purposely ignore morals for a greater cause. It also introduces a way in which he could plausibly come to power. It can only be inferred that poison is how he continued his way to the Presidency.

Honestly, I was not upset when the novel concluded and Snow had not reached his Presidency. The book left wiggle room for the reader to fill, and that is especially important when publishing a continuation of an already developed series.

My last point has to do with Snow’s avoidable mistake in the original trilogy: diverting all his attention and hatred towards Katniss Everdeen. He admits this flaw to Katniss, hinting at how their joined obsession with each other allowed President Alma Coin to quickly seize power. One might wonder why Snow had such a fixation on Katniss and not a shared interest in Coin. Alas, Ballad answers this question. While they are not the same character by any means, there are similarities between Lucy Gray Baird and Katniss Everdeen. Both are girls from District 12, and they have a shared rebellious nature that fascinates and frightens Snow. Perhaps his efforts to defeat Katniss Everdeen are also endeavors to finally destroy Lucy Gray Baird, who mysteriously slipped from his grasp years ago.

The Ballad of Songbirds and Snakes is a novel worth reading. It contains a surprising amount of political philosophy and brings to question whether the ends do truly justify the means. Suzanne Collins put a lot of forethought in her newest work, and it is definitely worth the attention of readers worldwide.